Story And Photos By Richard B. Sagar

On a visit to Hollywood, while touring the beautifully landscaped Hollywood Forever Cemetery, I found an interesting connection to Landaff history.  Here, among the many memorials to the rich and notable, is the final resting place of Landaff native Harry Chandler.  The imposing monument is located between the towering obelisk honoring his in-laws, General and Mrs. Harrison Gray Otis, and a memorial remembering the twenty souls lost in the 1910 bombing of the Los Angeles Times building.  General Otis was the owner and publisher of the Times for over thirty years, and Chandler succeeded to that position upon the death of his father-in-law in 1917.  Chandler had joined the Times in 1885 as a circulation department clerk, rising to circulation manager, and after his marriage to Marian Otis he had become vice president and general manager. 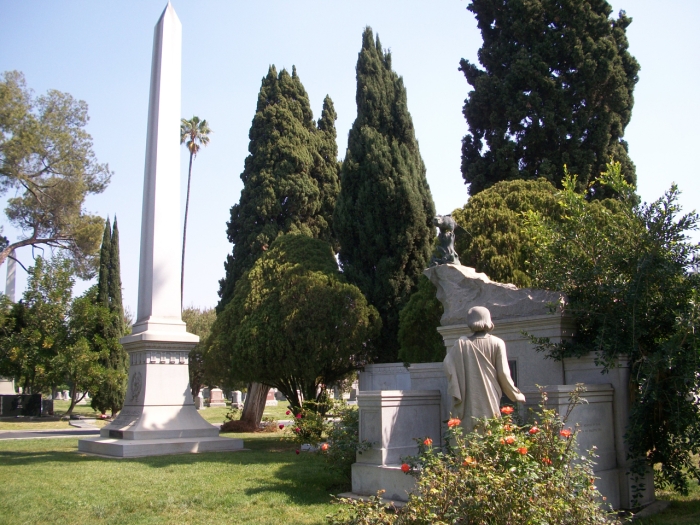 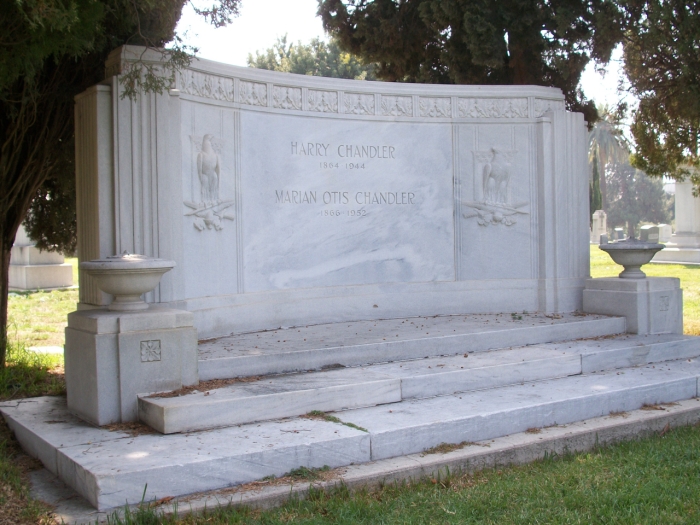 Chandler was born on May 17, 1864 in Landaff, the eldest child of four born to Moses Knight Chandler and Emma Jane (Little) Chandler.  He attended the Blue School through the eight grade, then continued his education in the Lisbon school system.  According to a widely reported story, while a student at Dartmouth College, Harry accepted a dare from a fellow student to dive through an icy crust into a vat of starch.  That unfortunate adventure resulted in a serious lung infection and complications that would trouble him for years.  On the advice of his doctor, he withdrew from Dartmouth and relocated to southern California for his health.

Harry was an enterprising entrepreneur and soon had a profitable business bringing fresh fruit into the San Fernando Valley, where there was a ready market.  In 1884, having made enough money for the long trip home, he returned to New Hampshire intending to continue his college career, but another health relapse caused him to reconsider.  Deciding that he would be better off in California, he returned and was joined by his parents, two siblings and his eighty-year-old grandfather.

After a short marriage to Magdalena Schlador, which ended tragically in 1892 with her premature death, Chandler married Marian Otis in 1894.  Harry and Marian had been married for over fifty years when he died on September 23, 1944.

Harry Chandler left a mixed legacy, and, depending upon your point of view, he was either a gifted visionary and benefactor who was largely responsible for making modern Los Angeles possible or a villain, opposed to the interests of organized labor, who enriched himself at the public’s expense; often using the Times and insider knowledge to further those aims.   There are compelling arguments to support both viewpoints; the truth is probably somewhere in between.

To his credit, he pioneered many of the rapidly growing city’s commercial and cultural developments.  The transformation of Los Angeles into the modern city is closely linked to the rise of the Times under the ownership of Harry Chandler and his descendants. He advocated vigorously for the establishment of a Union Railway Station and the historical plaza at Olvera Street.  The film, aviation, high technology, shipping and oil industries all grew from Chandler’s influence.  He began KHJ, the area’s first commercial radio station; organized Western Air Lines (later to become TWA after merger)  and helped Donald Douglas attract capital to southern California’s fledgling aircraft industry; he had a significant role in obtaining financial backing to convert Throop College of Technology in Pasadena into the California Institute of Technology and served as a Trustee from 1919 to 1943.  He was also a Trustee of Stanford University for some years.

Chandler also remembered his New Hampshire roots, providing $30,000 to Lisbon in the 1920s for the construction of a new library building.  In the 1960s his son made an additional gift of $10,000 for needed renovations.

As Los Angeles continued to grow, there was a desperate need to find an adequate water supply.  Many credit Harry Chandler with being the prime force behind the Times’ successful efforts to secure an aqueduct to bring the water resources of the distant Owens Valley to Los Angeles.  Crossing 233 miles of mountainous terrain, forbidding desert and canyons, the waterway took five years to construct at a cost of over 20 million dollars and forty-three lives.  It was heralded as one of the epic engineering feats of the age.

The aqueduct would also become an infamous symbol of a ruthless quest for water that caused massive environmental devastation to the once productive Owens Valley.  Farms vanished, and towns suffered a rapid decline as the waters subsided. The 110 square mile Owens Lake dried up leaving an arid alkali wasteland.  As Owens Valley residents grew increasingly frustrated, periodic violence erupted in the 1920’s in what would later be called the “water wars”.

It was later alleged that the backers of the water project had resorted to deceptive deals in their efforts to acquire the water rights, and were also involved in secret scheming by speculators hoping to make a quick profit on holdings in the arid San Fernando Valley.  The aqueduct’s terminus was in the San Fernando Valley, which at the time was not part of the city.  Unknown to the public, the initial water would be used to irrigate the San Fernando Valley.  The city charter prohibited the use of the water outside of the city, but the investors circumvented this by having the city annex a large portion of the valley.  Chandler, along with a small group of investors, armed with this insider information, had acquired much of the land in the Valley, the value of which sky-rocketed with the arrival of water.  Otis and Chandler used the influence of the Times to further their private dealings and successfully censored news of the dissatisfaction in the distant Owens Valley.  Roman Polanski’s film “Chinatown” was inspired by the scandal surrounding this affair.

Chandler also profited greatly from a variety of other real estate developments in the Los Angeles area.  In 1923 he paid $21,000 to erect the original Hollywoodland sign on Mount Lee to promote one of these developments.  The famous sign was later shortened to Hollywood.  He also profited from other real estate holdings throughout the southwest and Mexico, and, at one point in his career, was thought to be the largest private land owner in the United States.  Estimates of his wealth ranged from a low of $200 million to over half-a-billion dollars; the Times reported him to be one of the richest men in the world, in the early part of the 20th century. 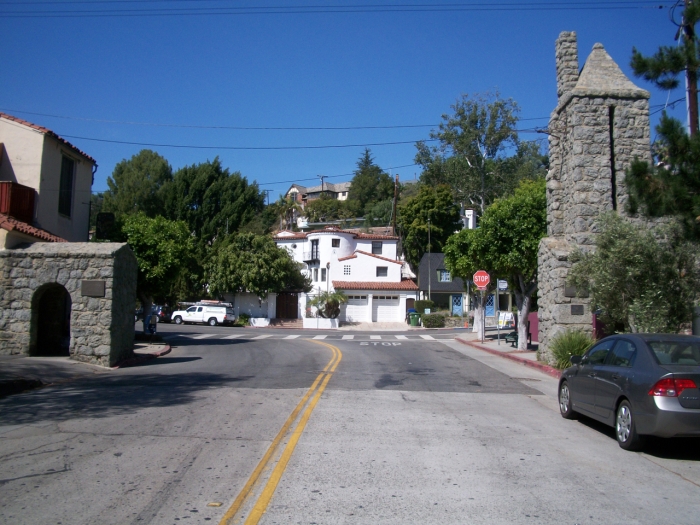 Original Gates To Hollywoodland Development, In Which Harry Chandler Was A Major Investor

The 1910 bombing of the Times offices, in which twenty perished, was likely the result of the strong anti-organized-labor campaign waged by the paper.  When Harry Chandler took over the reins of the Times he vigorously continued the battle with the unions.  Chandler was successful in avoiding unionization of the Times, in part, by following very generous employment practices, including wages higher than the going union rates, adopting a forty-hour week and, starting in the early 1920’s, providing a group insurance plan paid for by the company.

The Chandler family became one of the wealthiest and most influential families in the region.  Harry Chandler led the conservative Republicans in southern California for many years, and the Chandler family helped launch Richard Nixon’s political career.  The Los Angeles Times remained under the control of the Chandler family until 1999, when it was sold to the Tribune Company in Chicago for $8 billion.

The 2009 documentary “Inventing L.A.: The Chandlers and Their Times” by filmmaker Peter Jones provides an overview of four generations of the Otis/Chandler families and their strong influence on the development of modern Los Angeles.

Note:  There is a discrepancy in the published accounts of the 1910 bombing regarding the actual number of victims, with  some accounts indicating twenty-one, and others twenty; I have chosen the lower number as seeming the most probable based on the sources.  RBS

Meares, Hadley, “Infernal Machines:  The Bombing of the Los Angeles Times and L.A.’s ‘Crime of the Century’, KCET, kcet.org

University of Richmond, “A Dinner for Harry Chandler”, history engine.richmond.edu